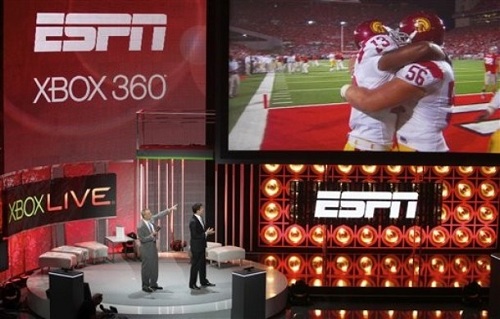 I watch more sports than nearly everyone I know. I watch nearly everything, too: I take cues from Twitter and find feeds for the dramatic NBA game du jour, I scour my cable for obscure college football games on fall Saturdays, I watch Sunday afternoon action sports on NBC if I have nothing better to do, and I’ve been able to turn that into a paying gig.

What I don’t do, at the moment, is spend a lot of time on ESPN3, and I didn’t use ESPN360 all that much, either. That’s not because it’s difficult to use, provides poor quality, or isn’t available: I can use it both at home in Brevard County and in Gainesville and I can navigate the simple menus easily to get excellent picture.

I don’t use it because not everything in sports I want to watch is on ESPN3.

The “3,500 live events a year” figure that has spread like oil in the Gulf is impressive. It’s also a bit misleading. The ESPN3 viewer will get 3,500 events, of course, but he or she won’t be getting most of the marquee events that show up on ESPN proper, just an assortment of events—non-revenue college sports, early-round tennis, cricket, and other things—that Americans generally have no problem ignoring as is. Unless you’re really excited about watching Sri Lanka bowl against the Windies and don’t care about the rest of ESPN’s and ESPN2’s offerings, you should probably not cancel your cable, Average Sports Fan Constructed for the Sake of Argument.

That USC-Ohio State game that was demoed yesterday at E3—an event that was a must-see last fall—would probably be available only in highlight form. While I understand that having controllable highlights on your HDTV through your 360 is cool, I’m skeptical that people will actively choose to watch what they could passively get on SportsCenter, and sending messages to friends with taunts just seems like what a middle-aged suit thought the kids would consider cool.

So I see a lineup of live events in HD that impresses me more based on breadth than quality (if ESPN/Microsoft were really smart about this, they would roll out or test ESPN3 on the 360 while the World Cup is on, because that’s the event of the year, and would go a long way towards convincing people that ESPN3 is what you need), and a highlight feature that doesn’t impress me, an Internet creature who can see everything instantly on YouTube or ESPN.com.

What’s good about this, then?

I think that if the integration of ESPN3 includes a DVR, it could be much closer to replacing a cable box. I already have a large hard disk on my 360; if I can use it to store replays of Gators games, I’ll be happy, and that’s another inroad to a service traditionally provided by cable alone. I also think that if I can get out-of-market broadcasts of my teams—one time I specifically remember using ESPN360 to watch a game was for the Florida-NC State game that produced Chandler Parsons’ miracle three—and/or use the personalization features ESPN affords on ESPN.com to have the Gators, Braves, Packers, etc. filtered out for me to watch without searching through menus, I’ll be much more likely to use ESPN3.

And I know, and would like to stress, that the concern that this is only “free” to users who have Xbox Live Gold memberships, and actually costs $50 a year, is hot air. Netflix has the same restrictions, and it’s only growing; a Gold membership is required to play most games online as is, so anyone who has hopped on for a Call of Duty: Modern Warfare 2 deathmatch or a Madden match-up has the capability to use this feature. Also, while current Xbox owners have had to connect consoles to the Internet via Ethernet cable or shell out for overpriced wireless adapters, the new Xbox 360 Slim has built-in Wi-Fi, making getting online with a 360 much easier.

It’s a good idea, in other words, and can be fleshed out, but ESPN3 on the Xbox 360, in its current form, isn’t something that’s going to change my viewing habits all that much. Because I think I tend to consume sports much like most of the young fan demographic, even if I consume much more, I doubt it will prove to be a death knell for cable.

Now, if ESPN could strike a deal to provide ESPN, the channel, to 360 users? The Worldwide Leader might as well send bouquets and condolences to Comcast/Xfinity and the rest of cable providers.